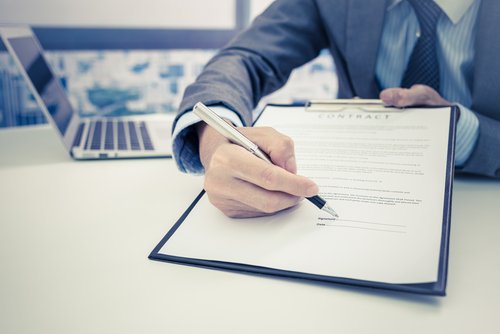 16 Jul The Basics of Contract Law

Posted at 21:14h in Business Law by JackieM
Share

The Basics of Contract Law

Contracts seem to be one of those basic legal concepts that can be so utterly confusing, so it is simply ignored. Most everyone now just accepts the “Terms of Acceptance” that our new app has and we barely read any legal document we sign. Contracts are very important though and it is imperative that you take at least a few seconds to skim through the clauses, if not read the document in its entirety. The principles of contract law govern much of our lives, especially if you are involved in running your own business. The following article sheds light on contract law basics and what you need to have in your contract to make it a binding legal document.

What is a Contract?
A contract is a voluntary, legally binding agreement, that is written or oral, between two or more competent parties that imposes an obligation to do or not do certain actions. To form a contract you must have an offer, acceptance, and valid consideration.

For a contract to become legally binding, regardless of whether it is oral or written, it must contain these basic contract principles:

This is not a conclusive list. If you are unsure of whether your contract should be in writing, please contact an attorney.

Unfortunately, contracts are not always completed as planned. Sometimes a party will breach a contract by not fulfilling the agreed-upon obligations. When a breach occurs, usually the parties will want to have the contract enforced by the court. This usually results in a breach of contract lawsuit. The court can either enforce the contract on its terms or the court may award damages in the lawsuit. There are three kinds of monetary damages that a party can receive during a contract case. These three monetary damages are:

If you need to form a contract or are facing a lawsuit involving a contract, it is best to seek the counsel of an attorney experienced in business law or contracts. Attorney Jacqueline MacLaren may be contacted here.